Taffy in the Window #1 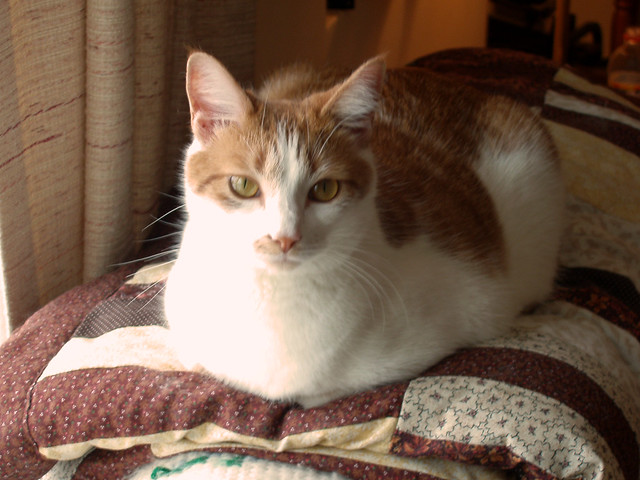 This, folks, is the first photograph I ever took with a digital camera. It’s a bit over-exposed, but my first photos are rarely this good….

Fifteen years ago today I wandered into Best Buy to check out the digital camera selection. I took home an Olympus C-50. Can’t say how I decided to buy that specific camera, though the enormous 5 MP sensor was doubtless a consideration. So, probably, was the fact that the camera wasn’t fully automatic.

My expectations were low, but it turned out to be a pretty good camera–I took about 5000 pix with it. Like all my pocket cameras, it eventually broke; its last outing was to Lake Michigan in the spring of 2005.

Much of what I remember about the Best Buy trip is that a friend from work was also looking at cameras that day. His National Guard unit had just been notified that they’d soon be called up, and we talked about that while we shopped. Jeff expected he’d be maintaining the same sort of electronics networking equipment for the army that he’d been doing for us.

A few weeks later he was gone to the Gulf and we never saw him again. For all I know he’s still running an army computer network.

More often than not my first photograph with any camera is of Taffy. This is largely because I unbox the device in our living room, where Taf’s generally sitting in the picture window. She’s convenient, in good light, and photogenic. I frame the photo and snap a few frames.

Joan’s my next-most-common first-photo subject, for much the same reasons.

For the record: My first digital photograph was taken with a flip-phone. Photos taken with that “camera” seem not to have survived.

This entry was posted in Life's Stories, On This Date, Picture Show. Bookmark the permalink.