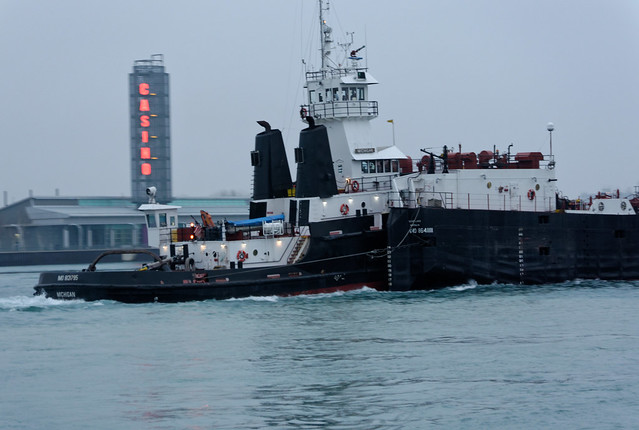 A tug, a barge, and the Point Edward Casino.

The tug’s named Michigan; the barge is Great Lakes. I think this is the only time I’ve seen them under weigh, though we’ve seen them many times at docks. In the 90s I often saw ’em parked at Greilickville, near Traverse City; in recent years we’ve routinely found the pair downstream from the drawbridge in Cheboygan’s harbor.

Before she retired, Joan routinely took a mid-December week off to Christmas shop, mail cards, hang decorations, and similar stuff. Three years ago, realizing she didn’t need the entire week, she suggested we try staying in Port Huron’s new Doubletree waterfront hotel and watch the lakers pass. So we did.

My image collection also includes 9 December 13 photographs taken by my brother. They were made during and after what appears to be an Advent service at Kalamazoo’s Lutheran Church of the Savior in 2010.