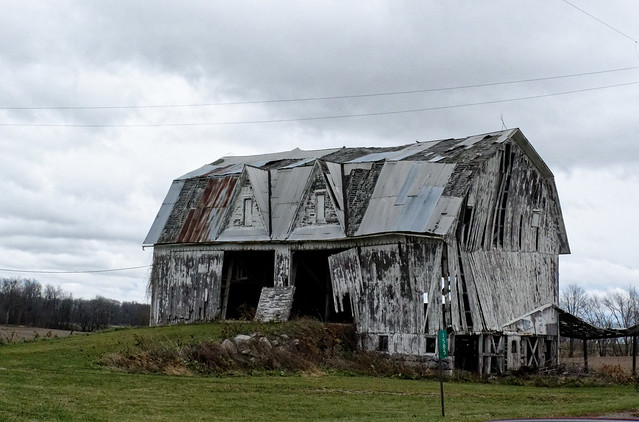 What a glorious wreck of a building!

I took thirteen pix of this barn on my way home after spending the afternoon with my sister in Kalamazoo.

You’d think I’d remember taking those photographs, but I don’t. My notes tell me this barn’s on Barry County’s Pifer Road, but I can’t be more precise than that. I know most of Pifer fairly well, which suggests the barn’s near the west end of the road, where I’m far less likely to travel. But that’s really just guesswork, and I’m skeptical of this theory.

I suppose, too, that the place could be on Lacey Road, which is the same road (check the map) and has a longer stretch I don’t know well. While I don’t generally make such mistakes, I’d not rule it out.

Or maybe I’ve just forgotten the barn. Or maybe it’s on some other road entirely and my note’s completely wrong.

I may need to take a scouting trip.

My sister found it on Lacey; here’s a similar photo on StreetView. I should have remembered it; that’s on the part of the road I’ve often traversed.