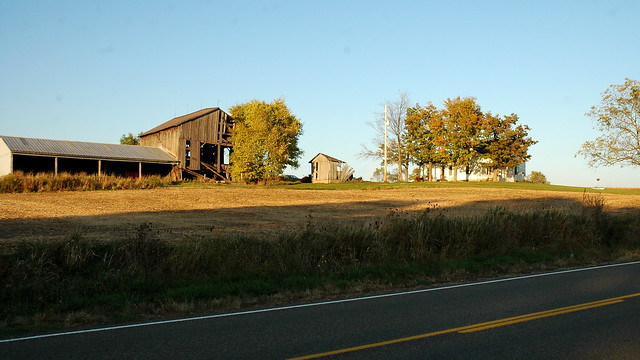 Near Vermontville, on State Road. Or so my notes say; I’d have guessed this was Vermontville Highway on the other side of town.

For the first few years I lived in the Lansing area I didn’t own a car, so I’d bicycle between my apartment in (or near) Lansing and my parents’ home in Kalamazoo a couple times a month. I’d leave from work on Friday evening, spend the weekend, and return on Sunday afternoon. Most of these trips took about 5 hours; if I hurried I could do the 75 miles or so in four.

I used a variety of routes, but most took me through Vermontville. I got to know the roads in that area quite well.

Vermontville was also about the farthest point I’d reach on my daily rides out of the Lansing area. Most evening rides were in the hour to 90 minute range, which wouldn’t reach that far, but if I wanted to stretch my legs after work I’d generally find my way to Vermontville Highway and head west, usually catching a snack at the Jones store where Mulliken Road crossed V-Ville Hwy. I’d ride a tailwind home and be back to my apartment by dark.

A side effect of those many backroads trips is that I sometimes take the same routes by automobile. While they’re slower than the highways I generally follow, they’re more interesting. This photo was taken on one such trip, a dozen years ago.

The colors were coming along nicely, I’d say. The outbuildings needed some work.

This entry was posted in Life's Stories, On This Date. Bookmark the permalink.