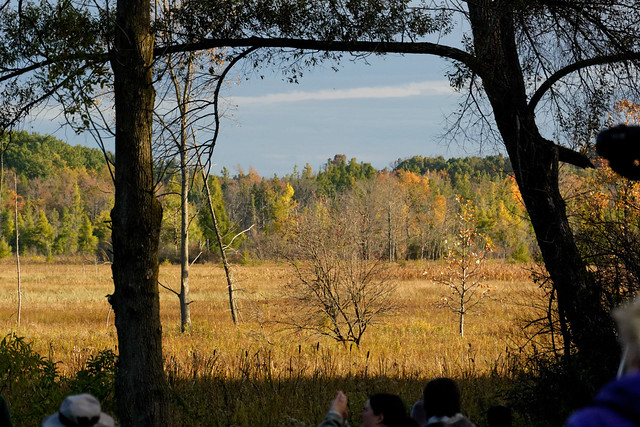 See? I told you Big Marsh Lake is more marsh than lake.

Three years ago I attached my Nikon FT-1 lens adaptor to my Nikon 1 V2, then fastened my ancient 300mm f/4.0 Nikkor lens to that getup. Then I put the whole mess on my tripod. The result was equivalent to attaching an 810mm lens to my old Nikon N90s film camera, but rather less expensive.

And much more difficult to use. I took hundreds of photographs that afternoon and evening; most were only approximately in focus.

An interesting experiment that I’m glad I tried. But I never repeated it.

The colors ain’t gonna be nearly so good on Saturday….

Likely this weekend I’ll attach the same 300mm lens to my D500, set the “Image Area” to 1.3x, and create the illusion of a 600mm lens. But it’s just an illusion; I could get the exact same results by cropping images made without changing the setting.

I shot 1936 photographs on 10/12/2014, mostly at CraneFest. I think that’s my highest single-day count. While I occasionally manage large counts at baseball games, my usual ballgame counts are between 250 and 500 images. I go to baseball to watch. The photos are a byproduct.