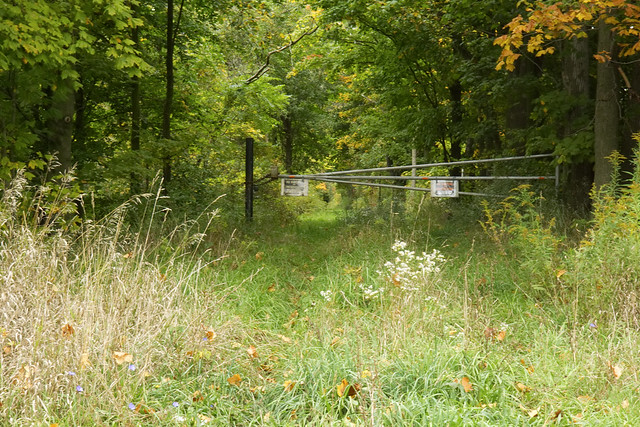 This gate, on Bunker Highway north of Eaton Rapids, blocks access to the remnant right-of-way of the Lake Shore and Michigan Southern Railway (aka New York Central) branch that ran between Jonesville and North Lansing. It’s across the road from the factory/warehouse complex that was built by the Michigan Peat Company in, I think, 1904.

About 30 years back I got curious about the diagonal boundary of my apartment complex. This led to a personal research project to trace the LS & MS branch to North Lansing. I discovered obvious remnants all along the line. Bridge abutments in Dimondale. An old depot in Springport. Still active rail lines in south Lansing. Property lines here and there that made no obvious sense. And an odd complex of large buildings north of Eaton Rapids.

I eventually found an explanation for the large buildings on Bunker in W. Scott Munn’s delightful The Only Eaton Rapids on Earth. Munn considered the Peat Company a fraudulent enterprise; others considered it a failed experiment. At this distance it’s hard to tell. Both interpretations may well be true.

I’ve discussed this before, and have posted a number of photographs of the Peat Company complex.

This entry was posted in Along the Rail Line, Mitten State, On This Date. Bookmark the permalink.