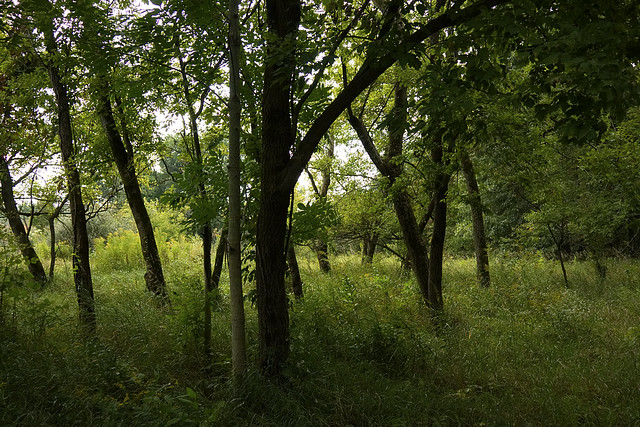 Another place we often wander is Michigan Audubon’s Baker Sanctuary, usually on their Meadow and Marshland Trail. You eventually come to a pretty little pond, which has a neighboring picnic area. This photo was taken there.

Baker Sanctuary’s most famous for its Sandhill Cranes, and for the Crane Festival (called CraneFest) it hosts with Battle Creek Kiwanis every October. We attend the festival most years and highly recommend it.

The sanctuary is near Bellevue, but is often said to be near Marshall. Neither town’s a helpful landmark, so here’s a Google map to the trail. And here’s an excellent trail map that Google found on Audubon’s website. There’s a second trail, called the Doty Wildflower Trail, at the park’s headquarters; it’s also worth a visit.

The sanctuary used to have an excellent website, but that’s gone. Michigan Audubon has a bit of information about the sanctuary scattered here and there on their website.

My brother Richard was still visiting our sister in Minnesota during 2008. Dick got some photographs of St. Matthew Lutheran Church in Fernando, where Debbie was pastor; the church was preparing for a festival. He also took some pix of horses at a local farm. In all I’ve 44 photos he took on 9/20/2008.