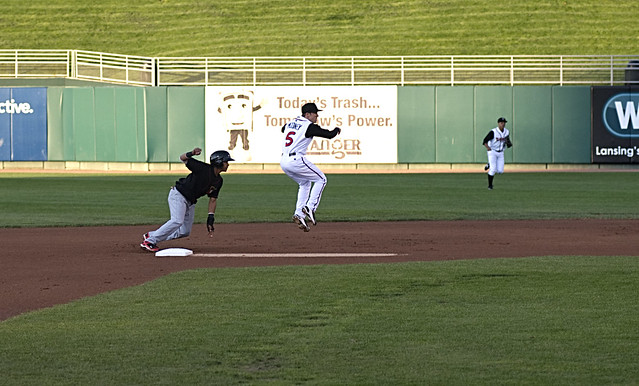 Lansing Lugnut shortstop Peter Mooney relays the ball to first base. The baserunner, who’s out, is Ronny Gil of the Quad Cities River Bandits; Mooney’s throw would not get QC batter/runner Oscar Taveras.

The Midwest League’s regular season ends on Labor Day, and is followed by a three-tiered playoff that ends in mid-month. In 2011 Lansing hosted Quad Cities (they play in Davenport) on September 15 for the second game of a best-of-five series.

The Bandits won the game by a 5-3 score, putting them up on the series 2 wins to no losses. They’d wrap the championship up at home the next night.

Two pics today. Because I want to tell two stories.

Just a reminder that I take lots of photographs at baseball games, only a few of which have shown up in this project.