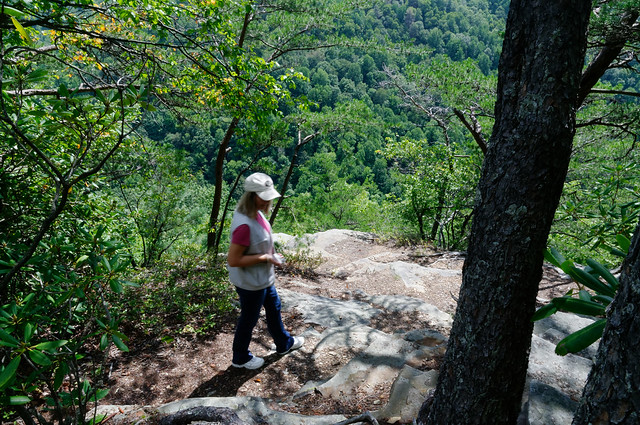 On the rocks, high above Glade Creek at Babcock State Park, in West Virginia.

I think this is Island in the Sky Trail, but it might be the Skyline Trail. Seven years gives you plenty of time to forget that sort of detail. I’m reasonably sure we walked both trails during this vacation.

We’d been warned about Copperheads. Sure enough, Joan spotted one basking in the sun….

We used to vacation in the New River Gorge pretty regularly, but it’s been a while now. We’ve camped in a tent, in our popup, in Babcock’s CCC-built cabins, and in hotels. Evidently we like the place.

Mayhap we’ll go back some day…..

Joan’s pic’s of me, shortly after eye surgery in 2004. I’ve also 47 pix by my brother; Richard went to a ball game in Kalamazoo while we were climbing West Virginia’s rocks.