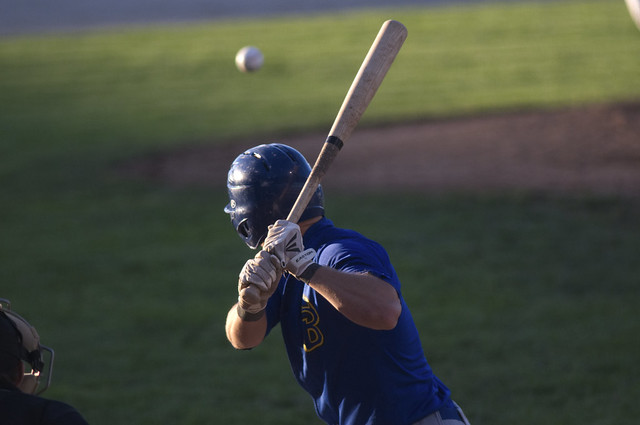 I often go to baseball games on August 1.

MacKenzie, batting for the Waterloo Bucks, is watching a pitch from Todd Eaton of the Battle Creek Bombers. Northwoods League action from my seat behind home plate at Battle Creek’s CO Brown Stadium.

A couple days back I mentioned that my baseball photography kit usually includes my rather old Nikon Nikkor 300 mm f/4.0 lens. This is why. The long lens makes an enormous difference.

MacKenzie attended Central Michigan University, and is the collegiate player I’ve seen most often while playing only for opposition teams. I’ve seen him play against both Michigan State and Western Michigan. I’ve seen him at CMU’s Theunissen Stadium, at MSU’s McLane Stadium, and at WMU’s Bobb Stadium. And here, of course, playing summer ball against Battle Creek’s team.

In 2014 MacKenzie returned to the Bucks and had an exceptional season. He was drafted by the Tigers in 2015, and played well in the low minors. But that career lasted only one season.