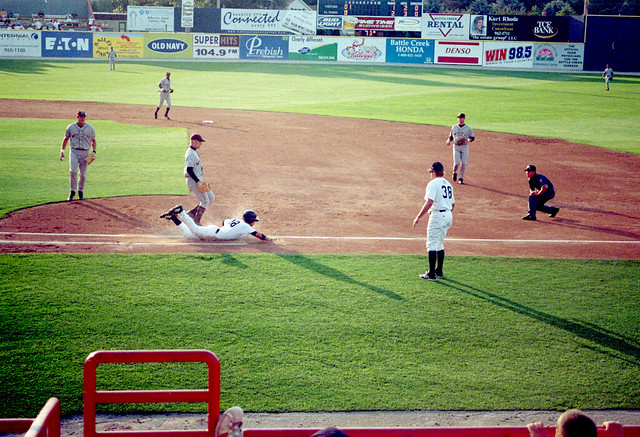 The Yank’s batter/runner is Enrique Cruz, with pitcher Paul Thorp (#38) in the coaching box. The Rattlers in the picture are first baseman Bryan LaHair, second baseman Mike Cox, shortstop Adam Jones, and (probably) pitcher Austin Bilke. Not sure who that umpire is.

Here’s the box score, courtesy of the MWL Archives website. My thanks to David Malamut.

Shot this with my Nikon N90s and the 28-105 mm lens I mentioned a few days back, and scanned it from a negative. I’d eventually figure out that a longer lens was desirable for ballpark photography. By April of 2005 my usual game kit included my then-new D70 and my 300 mm optic.

That lens was already several years old; I purchased it in 1998. I still take it to ballparks.