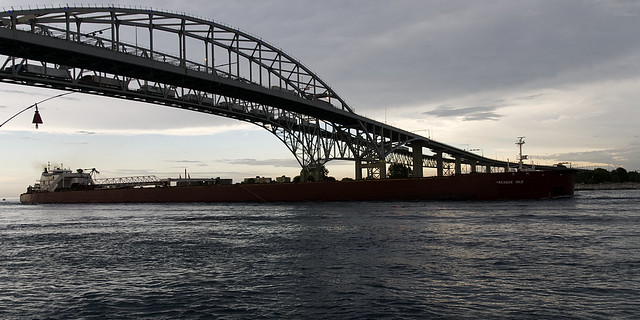 All thousand feet of one of my favorite ships as she passes under the Blue Water Bridge between Port Huron and Sarnia. Presque Isle’s just left Lake Huron and entered the St. Clair River.

And a fisherman’s pole, with a bell….

We spent the weekend in Port Huron with my brother and sister, One purpose of the short vacation was to celebrate Debbie’s return to Michigan after several years in Iowa and southern Minnesota. But mostly we were there to watch the big boats pass. ‘Twas a fine outing.

Other July 23 photos feature a similar outing to Duluth and Superior. Debbie, Joan, and I took a harbor tour in 2009.

Properly speaking, Presque Isle’s not a ship at all. She’s a long barge with a technically-separate tug attached–darned near built into–her stern. She’s what the industry calls an Articulated Tug/Barge. But the two pieces are well integrated, and neither’s useful without the other. For all practical purposes she’s a ship.

Mere technicalities. I realize most of my friends don’t care. Mostly neither does anyone else.