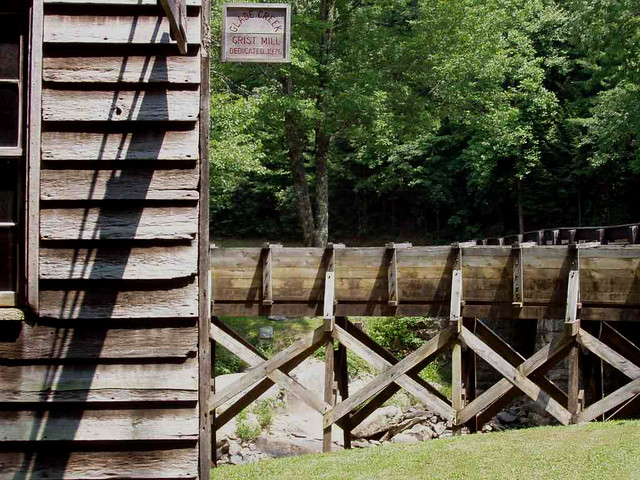 Babcock State Park’s a pretty place in West Virginia’s New River Gorge where Joan and I have often vacationed. On various trips we’ve camped in a tent, camped in a popup trailer, and stayed in cabins. Obviously we enjoy the place.

The park’s mostly a rather steep wilderness on the side of the gorge, but its most famous feature is Glade Creek Mill. This is that mill, as the sign testifies, but it’s none of the usual pictures. I’ve taken those photographs, too, but….

This is the only digital photograph surviving from that vacation. I’ve film pix from that week, but I can’t confidently date those.

I’d bought my first digital camera in late 2002, and while I was still predominantly a film SLR photographer it was clear by the summer of 2004 that I needed to back up my digital images. So I began burning the pix to CDs. After a false start or two I came up with the system I still use, though it’s been augmented over the years. I began with the oldest digital pix and worked through 2003. At that point I took a break.

Then my laptop’s drive failed. The only digital pix that survived that failure were duplicated, for one reason or another, and stored away from that computer. This photo was one of those. But the larger reality is that I lost most digital images I took between Christmas of 2003 and October 2, 2004.

There’s a lesson in there….

And a new camera note: One year ago today I bought my D500. It’s been fun, but I’m still figuring it out….

This entry was posted in Life's Stories, On This Date, Picture Show. Bookmark the permalink.