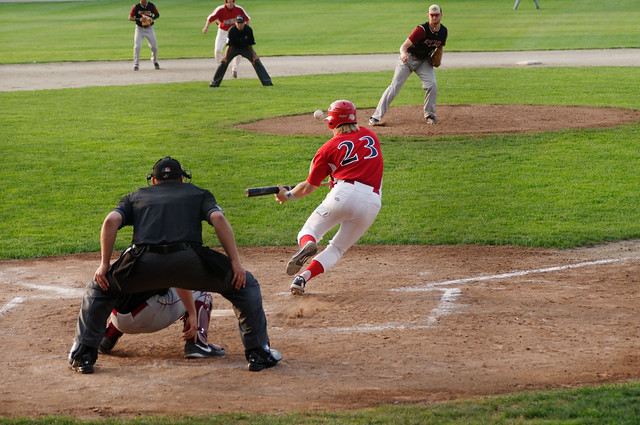 Cam Gibson–Kirk’s son–putting the ball in play for the Battle Creek Bombers against the Wisconsin Rapids Rafters. I’m pretty sure the WR pitcher’s Brandon Schmidt.

This was a Northwoods League game; these are college players using wooden bats and playing mostly in what used to be professional facilities. For some players it’s a summer lark; for others its preparation for the minor leagues.

The bunt worked, by the way; he got a single.

Cam’s among the most exciting baseball players I’ve ever seen. In some ways he’s a slightly smaller version of his dad–but I think he’s even faster, and he lacks Kirk’s astonishing power. The Tigers drafted him a couple years ago, and he’s working his way through the Detroit farm system.

Gibby played baseball for Michigan State for three years, at Battle Creek for one summer, and for West Michigan (Grand Rapids) in 2016 and 2017. So I’ve seen him play quite a few games. He’s worth watching. But he’s not the instant star his father was; that’s really asking too much of any youngster.

Cam was promoted to Lakeland a couple weeks back, when Detroit did their annual mid-June minor league player shuffle. Perhaps we’ll see him at Comerica in two or three years.