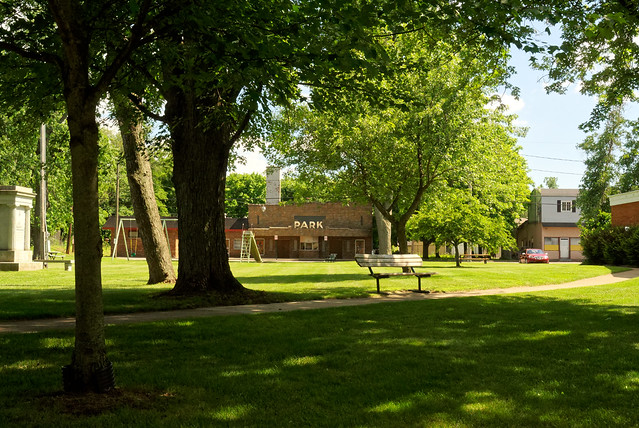 I visited Richard at the nursing home north of Galesburg, then stopped in Augusta to photograph the park. And the Park.

Watched a movie in the Park Theater once. Cannot recall what movie, nor how it happened we went there instead of somewhere closer to home.

Augusta’s a tiny town, near Battle Creek, locally famous mostly for its summer stock theater, the Augusta Barn, where Tom Wopat, James Sikking, Dana Delany, and others practiced their craft when they were young. (And not so young: Wopat, for one, keeps coming back. We saw him in South Pacific nearly 20 years ago, and I see he played Will Rogers at the Barn in 2015.)

During World War II Augusta was the town nearest the gate at Fort Custer, which was active at the time. While I imagine many soldiers found their way to Battle Creek or Kalamazoo, Augusta was convenient. Hard to imagine what they did, though. (Or maybe not: I remember Sierra Vista in 1970, when it was much smaller than it is today, I managed to find things to do when I was bored at Fort Huachuca.)