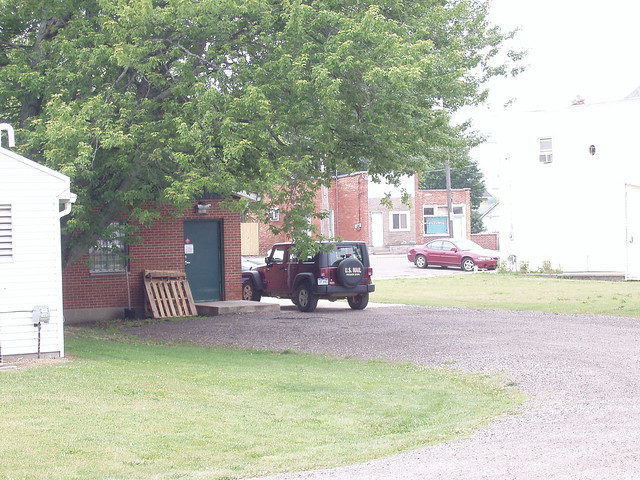 Fawn–who used to deliver the local rural route–would park her Jeep behind the Mulliken post office while she helped Maureen and Jan sort the day’s mail. Except by 2012 Mo had retired and Jan was only working part-time, so probably someone else was running the office when I took this shot.

Before the year ended they’d moved the mail sort to Grand Ledge, and shortened the hours of my town’s PO.

This is one of my rare SOOC (Straight Out Of the Camera) images….

Four years ago I posted a monochrome version of this photo to my 366 Snaps Outtakes “project,” which attempted to explain the previous year’s 366 Snaps. I see that my commentary on the photo was about the same.

What those comments didn’t mention is that the photo’s overexposed. That’s partly the high contrast of my composition–white buildings on both edges, with bright sun most everywhere, but Fawn’s car’s in the shade. Which was sort of deliberate. I was bored, and trying to push my camera’s limits that day. This specific photo came out well.