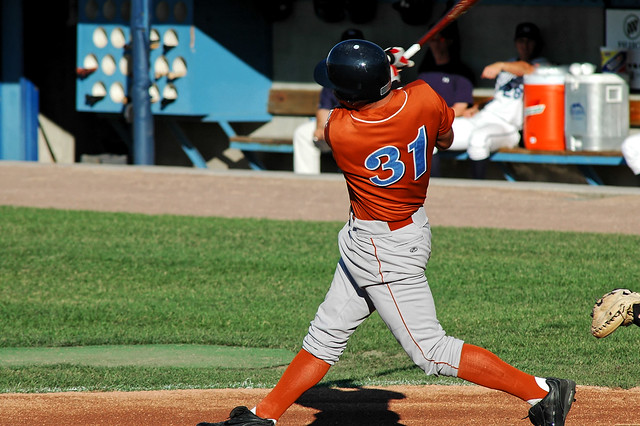 Do I need to explain Rick Ankiel’s career?

Ankiel was signed out of high school in 1997 and was pitching for the major league Cardinals soon after his twentieth birthday in 1999. In 2000 he pitched brilliantly, finishing second in the Rookie of the Year voting and finding himself compared to Lefty Carlton and Sandy Koufax.

Then it all came apart. On October 3, in a playoff game, he lost it. And it never came back. He pitched a few games for the Cards the next year, and a few more in 2004, with poor results.

So he became an outfielder. He returned to the Cards in 2007, and played in the majors through the 2013 season, mostly as a center fielder, mostly as a spare part, with six different franchises.

Not the career we imagined for him in 2000. But a respectable, and truly interesting, adjustment to circumstances.

In 2005 he was playing for Quad Cities when I saw him at West Michigan’s ballpark, and took this photo. He had two plate appearances in that game, then left the game after a minor injury.

Rick’s recently written a book about his baseball career, The Phenomenon. Haven’t read it yet, but the reviews I’ve seen are quite positive.