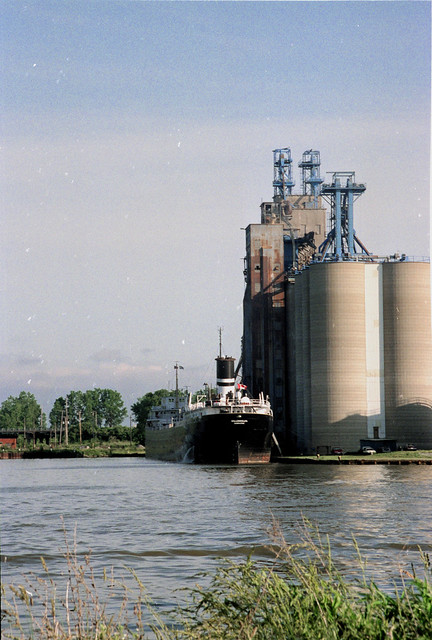 On this date in 1991 my sister, my brother, and I watched Cleveland’s Tom Candiotti beat Detroit’s Frank Tanana at Cleveland’s Municipal Stadium. Many off-speed pitches were thrown.

On our way home we visited Huron to see what remained of what we knew to be a largely-dismantled port. We found some pretty recreational slips, the grain elevator, and Willowglen.

Willowglen becomes the first Laker–Great Lakes freighter–for this project. It’s unlikely to be the last.

We’d been hoping to find remnants of Huron’s Hulett Unloaders. No such luck.

There were clues that Huron had quite recently been a fairly major port–slips for large ships; a bunch of abandoned rails–but the large gear had been removed. I can’t say we were disappointed–we found about what we expected–but it’s safe to say we’d been hoping for more. Nonetheless we enjoyed the little side-trip.

By ’91 the Huletts had been retired. We’d seen ’em, at varying distances, in Toledo, in Cleveland, and in Conneaut, but hadn’t seen them in action, and hadn’t seen them up close. Truth told, we started seeking out the beasties too late.