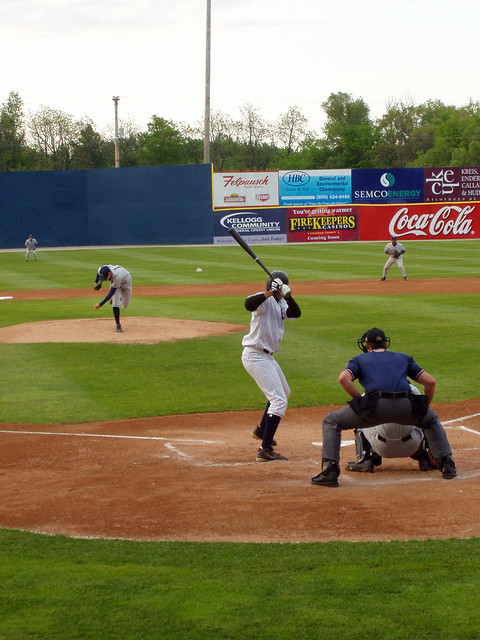 Here’s a Midwest League game between the Beloit Snappers (a Brewers affiliate at the time) and the Battle Creek Yankees. Beloit won, 6-0.

Beloit’s Prince Fielder would have the best major league career of those who appeared in this contest. I strongly recommend that you not watch minor league baseball with that question in mind, however. Just enjoy the darned game.

2003 was the first year I systematically photographed baseball. Most of the photographs were taken from my seat using my Olympus Camedia C-50; those usually looked pretty much like this. On days I brought the Nikon I tended to move around, and got more interesting photographs.

I was writing what amounted to a blog about the BC Yanks’ season (it’s no longer on line), and used the photographs to illustrate my commentary. But Mom passed away on April 30 and I lost the energy for regular updates, which ceased on May 20.

By this time I was in the habit of photographing baseball games. I’d continue to do that all summer. And beyond.