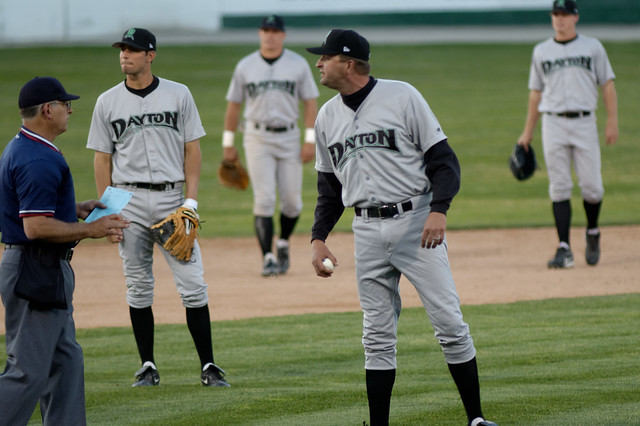 Yeah, the picture’s crooked. It makes Billy look even taller than he is.

Dayton Dragons manager Billy Gardner, Jr, arguing with a replacement umpire (the minor league umps were on strike) during a game against the Southwestern Michigan Devil Rays at Battle Creek’s CO Brown Stadium.

I have no idea what the discussion was about. Frankly I took the argument as part of the evening’s entertainment.

My scorecard probably knows the umpire’s name (haven’t checked), but the box score doesn’t. The umpire’s strike lasted nearly half of the season, ending on June 12.

We folks in the stands were gigglin’, I’m afraid. Billy’d managed Battle Creek’s team in ’97 and ’98, and this is how we remember him. Billy bein’ Billy.

Gardner’s still managing in the minors. I see he’s still doing this.