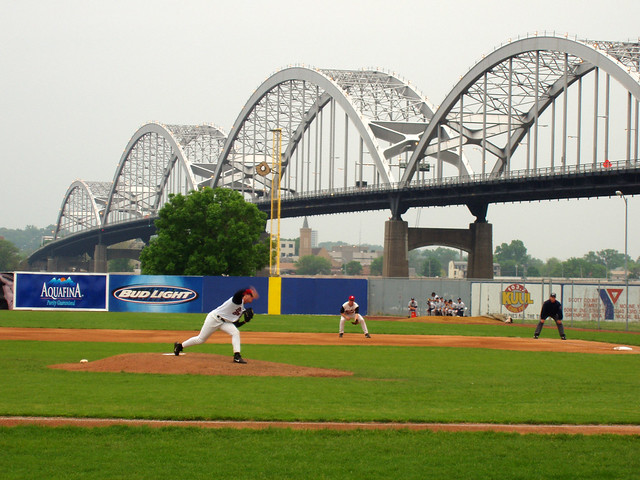 While my sister was in seminary we regularly visited Iowa–to help her move, usually, but a couple times just to visit. In 2003 we followed the Mississippi down to Davenport and watched a ballgame.

The Whitecaps lost, but we had a good time. And enjoyed the extraordinarily scenic ballpark.

This ballpark’s now known as Modern Woodmen Park, and was originally Municipal Stadium. But for most of its life it honored local sportswriter John O’Donnell; I prefer to call it JOD.

I’ve recently reread Pat Jordan’s memoir of his minor league career, A False Spring, which I heartily recommend to anyone interested in minor league baseball. It’s a painful and frustrating book, largely because the author and his subject have blind spots (yeah, the same guy, but separated by a dozen years or so). It’s also fascinating.

I was intrigued by his discussion of this stadium, where he pitched in 1960. He calls it “a vast, roofless warehouse”–not my impression at all, but perhaps Pat’s memory’s influenced by the ballpark’s facade.

This entry was posted in Baseball CrankSpace, Family Mirror, On This Date. Bookmark the permalink.