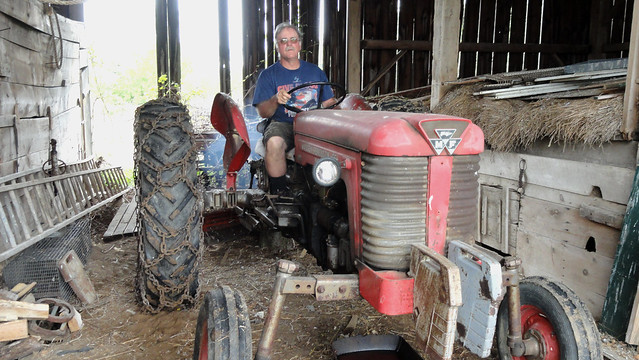 Two years ago we dropped in at the farm to help celebrate David’s birthday, a couple days late. Dave had gotten his father’s old tractor to run a few days before, so that was the main topic of discussion.

That and Dave’s garden, chickens, ducks, and turkeys. And the old plows. And restoring the barn. Lots of things to check out, and talk about. A fun day.

On May 9 I often go to the ballpark. The 2005 game deserves a bit of attention, because it was the first game I photographed in what I’d call my usual style.

While I’d been experimenting with game photography for about a month, this is the outing where I put the pieces together. Not all the pictures worked, of course, but enough did that I’ve stayed with that general approach ever since.

I’d refine things a bit over the next few games. But this game has the basics down.