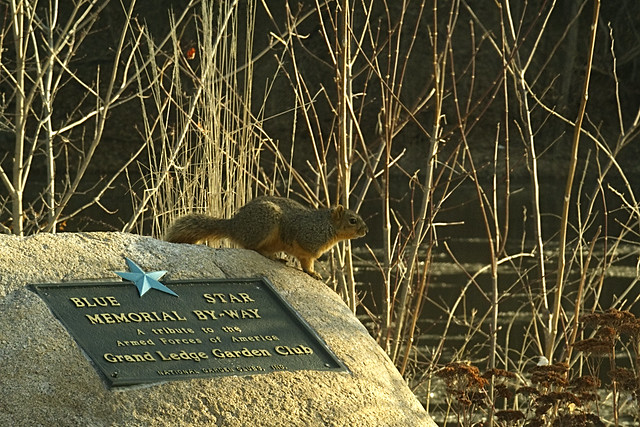 On the Grand Ledge Blue Star Memorial Byway marker. A few months later I got a better photo of the rock, but the marker’s more readable here. And the other photo lacks the decorative rodent.

The marker’s on the edge of a parking lot that serves Island Park (aka Second Island), the Masonic Temple, and the local Pony League ballpark [Fitzgerald Field]. It’s a small lot, but it’s rare for two of the facilities to be in heavy use at once; besides, the city’s big downtown lot is just a couple hundred yards away.

The marker’s also on the Grand Ledge Riverwalk, which I heartily recommend.

Island Park’s one of the places I go when I can’t find a photo and want to get away from the house. There’s always something–ducks, fishermen, the moving water, the changing seasons….