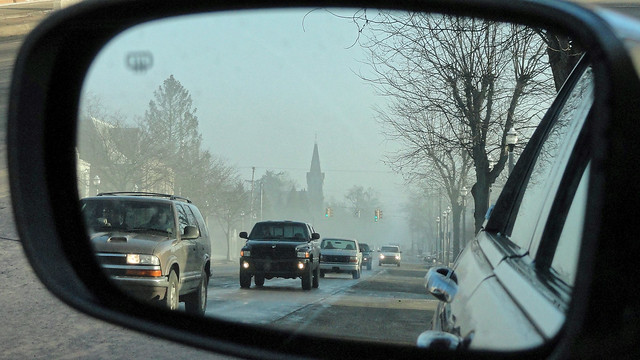 It’s 9:07. I’m a few minutes late for our biweekly get together at Hamlin Square. I’ve just turned around at the River View Cafe and parked on Main Street in Eaton Rapids. I’m directly behind Mike’s Honda with the YESGOD plate and am waiting for the traffic to clear.

Mike’s already at the coffee shop–he’s always the first arrival. I’ve beat Joe, though, and since it’s Wednesday he’s likely picking up Bob on his way in.

This is the only photograph I took on 3/11/15, and was completely without context in a folder I labelled “Miscellaneous.” That steeple–it’s First Congregational Methodist–is the only potentially-recognizable landmark in the pic, but the fog’s obscured and distorted it. And of course everything’s reversed.

So I checked my calendar for the date. Aha! Eaton Rapids.

I miss Hamlin Square. We’ve moved the gathering to Fay’s in Charlotte, which is a fine place, but….