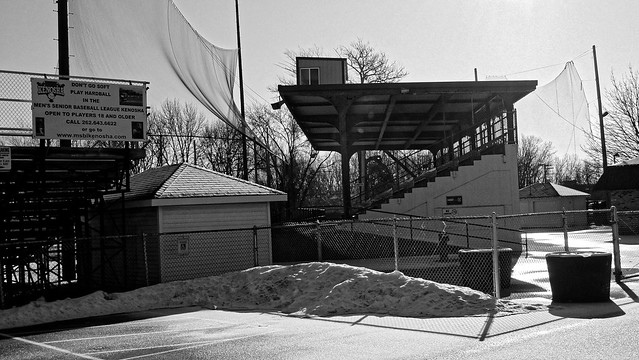 Most local chapters of the Society for American Baseball Research (SABR) meet on the last Saturday in January in an event the Society calls SABR Day. Five years ago today David Malamut put together a program for the Milwaukee and Chicago chapters centered on Midwest League (MWL) baseball–so I had to go.

‘Twas in Kenosha, a town about half-way between the two big towns and an MWL city itself. Since I was already in town, I sought out the old ballyard, and took photographs.

Then I went to the meeting. Heard (and talked with) former Kenosha owner Bob Lee, someone I’d long admired. Had a good time, and met several people I’d previously only known via e-mail.

They’re meeting again today, by the way, at the same place–Kenosha’s Brat Stop. Can’t be there, but my heart’s with ’em. If you can make it, I recommend it.

ALSO: SABR Detroit’s meet is next Saturday, at the Detroit Public Library. This event will center on the Negro League Detroit Stars. I’ve a conflict, or I’d be there.