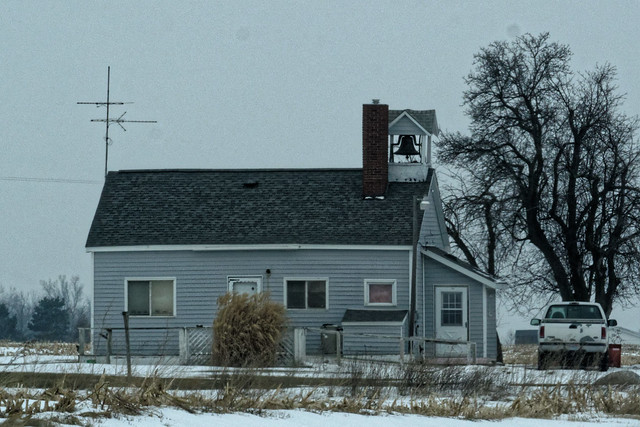 There once was a settlement at the center of Roxand Township in Michigan’s Eaton County. This old schoolhouse is all that remains.

The Post Office called the place Centre, but mostly you find it called Roxand Center. I expect if I hunted hard enough I’d find a reference to Roxana Centre/Center, but I’m not interested enough.

While I’ve taken a handful of pix in other years, the bulk of the January 24 pix date from the 2012 daily photo project. I was clearly bored; I tried a little bit of everything. There’s a pic taken at my dentist’s. Another couple came from where I ate breakfast, and I caught some more on my way home. Then I took random images around the house. There’s even a rubber ducky photo. And a cat, of course. Eventually I posted one of ’em–of a bird feeder, which I actually like.

For the 2015 daily project I took only 8 photographs. All were framed well; all had technical issues. I set to work in AfterShot Pro (ASP) and was able to rescue most of ’em. In the end I posted a photo of an ancient lawn tractor, sitting by the road in the snow.

OpticsPro accepted the ASP changes from that session for this photo and we’re going with those today.