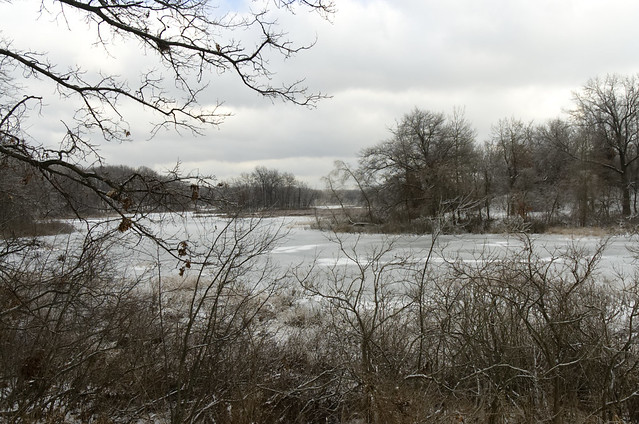 We’d had an ice storm the night before, ten years back, so I turned a trip to my brother’s into an opportunity to capture some of the storm’s beauty.

I ran a few errands and stopped briefly at the office to catch a photograph of the Board of Water and Light’s cloud machine. Then I took highways to Kalamazoo.

This is Mud Lake, near Delton. I’d snapped a few pix of the buildings at Hickory Corners but this was my photographic target–I knew the view, and expected to find good pix. I wasn’t disappointed.

How do you reconstruct these stories, Joel?

The photos help, always. So does other knowledge. For instance:

I always took a week off in January to do some mid-winter chores. This was that week in 2007–note that on the sixteenth Joan went to work whilst I stayed home.

The day’s photographs show that I was on Lansing’s west side around 1:00 pm, and at the Secondary Complex swamp around 1:30. So while I don’t recall what the day’s chores were, I do know I was doing something in town.

The rest is easy. I took some pix at the rest area near Turkeyville, which means I took the freeway somewhere. Since the next photo’s in Hickory, I likely stopped in Kalamazoo. The Kalamazoo stop took about an hour, as the photo’s timestamps have me at Hickory Corners around 4:00 pm.

I probably turned off M-43 at Hickory Road, though a couple other routes are possible. The route from the village to the lake is simple and obvious. Likely I returned to 43 in Delton, though there are a half-dozen or so other routes to my home from Mud Lake. 43’s most likely because I’d want to reach home before Joan.