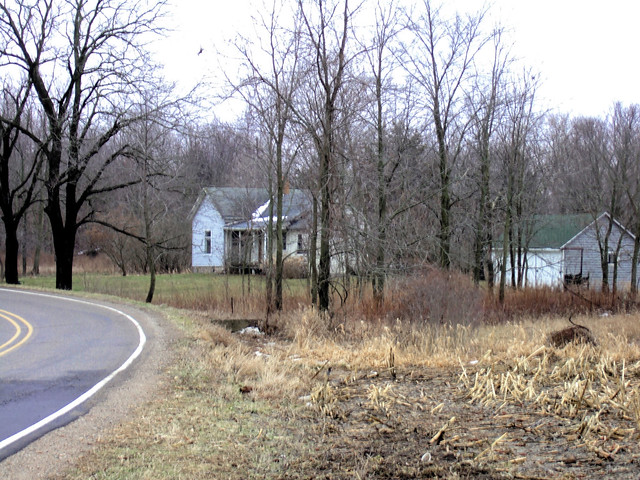 This house is gone, now, but over the years I photographed it several times. It was in Danby Township, between Mulliken and Portland, and likely had a view of the Grand River when it was built.

The 2006 photo set shows a mobile home and a shed beyond that garage, and there was a mostly intact barn in the field, just out of this frame. By 2012 the garage and shed had gone, and the trailer and barn were largely collapsed. A few months ago everything remaining was removed and there’s little trace of what was once someone’s pride and joy.

I’ve discussed the place before–here, and here. I’d like to think you’d find those interesting.

I spent about a year cataloguing my photographs a couple years back, using IDImager’s Photo Supreme to build the database. The software’s powerful, but under-documented. I can highly recommend it if you’re willing to put in the effort to figure it out, but you should find something else if you’re not. After two years of hard use I’m still finding features.

I’ve taken a couple hundred thousand photos in my life. (Yes, I know of folks who’ve taken many more. It’s still a substantial collection.) The catalogue I’ve built makes finding, say, every photo I took on January 2 a realistic project. Or every photo of this farmyard.

Number of pix taken on various January 2nds: 254
Year of oldest photo: 2006
How I Rated the Date’s Photographs: